skip to main | skip to sidebar

It should be said that my passion for baking is somewhat at odds with the healthy eating regime newly instituted at home. And so it is that the merest hint of a visitor is taken as a welcome excuse to divert from the straight and narrow and sends me scurrying to the kitchen to get my pinny on.

I had been meaning to try this recipe for a while, a whim based somewhat tenuously on my addiction to Peanut Butter M&Ms (thankfully not widely available in the UK otherwise I would end up looking like Giant Haystacks circa 1974). Nonetheless in my book salty peanut/butter plus sugar is a winning combination so how could I resist?

As there were to be just four adults consuming said treat (toddler participation vetoed on grounds of nuts = potential choking hazard) I figured I'd halve the recipe. But then the very thought of having to work out what constituted half an egg sent me all gung-ho and I threw caution to the wind and went for it verbatim..

Thirty biscuits? No prob - we'll get through 'em in no time (close eyes to try to block out Giant Haystacks images that are back to taunt me...) There were unexpected issues in tracking down Trex - which, when finally sighted in a local megastore appeared to come only in industrial quantities - but it was worth the hunt (trek/s?!) for the texture was as light and crumbly as any biscuit lover could desire.

Quick to cook - and easy to make too - at least bar the sugar dusting, a practice at which I appear to be largely incompetent (bear witness to the not-very-sugary-topping on a number of my efforts)

I could blame the recipe for not spelling out in words of one syllable that this step needs to be repeated from scratch for each and every biscuit - or I could admit that my cack-handedness and desire to grab a quick kip while the tiddler slept was more probably the reason for my undoing.

To anyone flicking enthusiastically through Domestic Goddess in search of the details (page 55 since you ask) I would counsel that unlike me you ensure a more-than-liberal sugar pressing on every biccie. Otherwise they just aren't sweet enough.

Will I make them again? Had the visitors not cancelled last minute (unforseen lurg) leaving all 30 cookies to be consumed by the two of us alone I would have said yes. As it is I think it's going to be a very, very long time til either of us will be able to face another peanut in any form whatsoever.
Posted by Cari Rosen (aka @cazroz) on Tuesday, July 13, 2010 2 comments:

I am aware that I must repent both for my lack of posts and what appears to be an obsession with fairy cakes. And so I shall bid the beauteous buns farewell in this valedictory entry.

First - may I present to you a creation that I had intended to call "The Towering Inferno" - but then the sparklers refused to light so it was less conflagration, more damp squib. We got there in the end, although the stress temporarily affected my ability to capture the moment on film, hence a picture with strange and inactive grey sticks dotted about the buttercream. (They are sparklers I tell you, sparklers...) 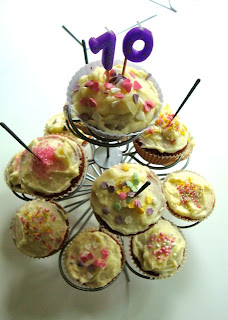 I had puzzled long and hard over what to make for my mum's special birthday. I wasn't sure she'd want a Peppa (current speciality - see earlier entry). Nor a monkey come to that. I wasn't convinced that traditional royal icing would make it 200 miles up a motorway unscathed, although I am (if memory serves me right) a dab hand with a bit of lattice work so perhaps another time.

And so this is the end result. As you can see - it went down a treat. 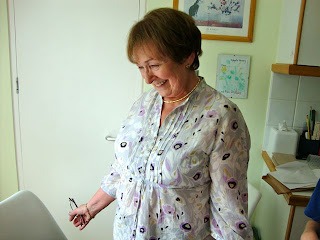 My final foray into fairydom is a gift for a reader of this blog. I had promised to make something for her and the birth of her second beautiful son seemed the right occasion on the basis that new babies = lack of sleep = lack of energy = need for calories.

Honourable intentions perhaps, but making them half asleep on a Wednesday evening proved that the old adage is true:

S/he who bakes when not awake is likely to leave the sugar on the scales. (And let me tell you - cakes without sugar are rank...)

Take two - and this time success. White chocolate buttercream whipped up between breakfast and the nursery run. A treat for a new mum - and a day spent removing hundreds and thousands from the far reaches of the kitchen for me (will I never learn..?)
Posted by Cari Rosen (aka @cazroz) on Thursday, July 08, 2010 2 comments:

Cari Rosen (aka @cazroz)
Things I have learned over the last year: 1) It is not wise to write a book with your age in the title if you ever want to lie about being 30-something again 2) I cannot be trusted within 100 yards of a Lindt chocolate bunny 3) I spend far too much time in Tesco