skip to main | skip to sidebar

We followed the instructions to the letter - and yet the resultant dough was saltier than a salty thing dripping in sea water. I checked the recipe - yes, 1 tsp of salt. I checked the measuring spoon in the sink to check I hadn't accidentally used a tablespoon instead of a tea spoon - but no - all present and correct. 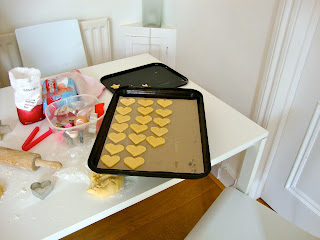 The biscuits and the remainder of the dough went straight in the bin and we moved on to rolling out recipes new - in every sense. But with a party to prepare for and requests for "cutting shapes mummy" we gave it another go. This time I added just half a teaspoon of salt and the results were perfect.

The tiddler and I rolled and cut and rolled and cut experimented with hearts, stars and numbers. Twelve minutes in the oven, a few minutes to cool and on with the decorating. For the sake of expedience I did the icing. The child was put in charge of sprinkles (100s and 1000s - huge mistake - they roll and bounce everywhere. Next time we'll try a slightly more tameable vermicelli variety). 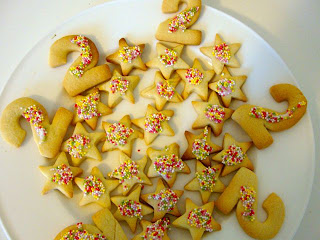 Before the entire house got covered we instituted a dipping procedure (iced biscuit into sprinkle bowl and hey presto) although the child quickly discovered the joy of decorating her own sticky fingers (dip, lick, dip some more...carnage). 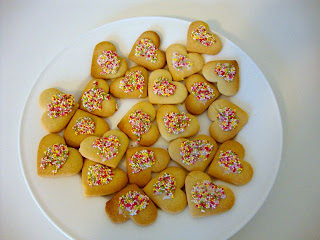 But by hook or by crook, the end product was delicious and much admired (plate of spares for mums and dads vanished so fast we got the insect spray out and went in search of a plague of locusts...) And better still - we've got more dough in the freezer to try it all again
Posted by Cari Rosen (aka @cazroz) on Wednesday, April 14, 2010 2 comments:

Sweet Treats For A Happy Birthday

The child turned two last week. When we asked what she wanted for her birthday her answer was "a cake and a candle". How could mummy refuse?

We celebrated with a family tea on the day itself followed by a party for her friends at the weekend. I don't need much of an excuse (OK - I will use any excuse) to get the baking gear out so not surprisingly this presented me with an opportunity to really go to town.

First up the cake. The wee one loves monkeys so a monkey it had to be. I hummed and ha-ed between Nigella's Victoria Sponge and a tried-and-tested-so-much-I-can-do-with-my-eyes-shut one-bowl chocolate cake. The latter won on the basis that monkeys are brown...

So the cake itself was super simple to make. I trawled the net for piccies of monkey cakes til I found a couple I liked and based on those photos drew a template on a piece of A4. Sounds simple but you should bear in mind that I failed art O-level (yes, I am that old...) not once but twice. 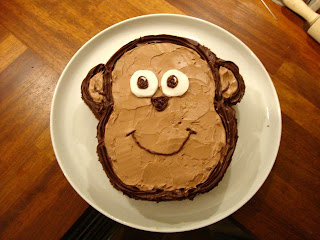 Whipped up chcolate fudge and regular buttercream icing then mixed the two together fot the lighter brown.

The cake making was interspersed around a vital Champions League tie, one that ended badly so at least making a monkey face provided some form of distraction and I managed to avoid getting tears of frustration in the icing. Instead I took out my angst on the ready-to-roll (black and white - used to make the eyes and surprisingly satisfying in terms of bashing)

On the big day itself the child received many amazing gifts but when asked what she had had for her birthday the reply was always the same - a monkey cake with candles. Bless.

I had been planning the cake for the party for - ooh - months on end. A farmyard scene with animal cupcakes (based on Nigella fairy cakes - natch) all around. The cupcakes did indeed come to fruition (and went down very well as going home gifts) 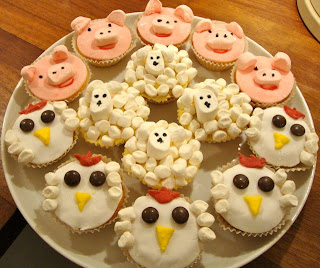 but despite tinkering with varous designs for barns I never quite got what I wanted. So - last minute change of plan - a Peppa cake instead. 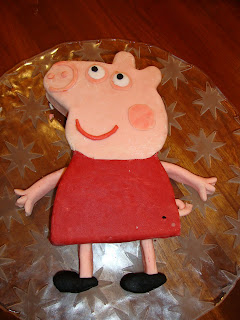 Given my ineptitude in the artistry department I found it surprisingly simple to make - though colouring the icing pink left my hands looking like I had single-handedly murdered at least a dozen people. Hey ho - the birthday girl and her friends all loved the result and I guess my hands will return to normal at some time in the near future.
Posted by Cari Rosen (aka @cazroz) on Wednesday, April 14, 2010 No comments:

Cari Rosen (aka @cazroz)
Things I have learned over the last year: 1) It is not wise to write a book with your age in the title if you ever want to lie about being 30-something again 2) I cannot be trusted within 100 yards of a Lindt chocolate bunny 3) I spend far too much time in Tesco